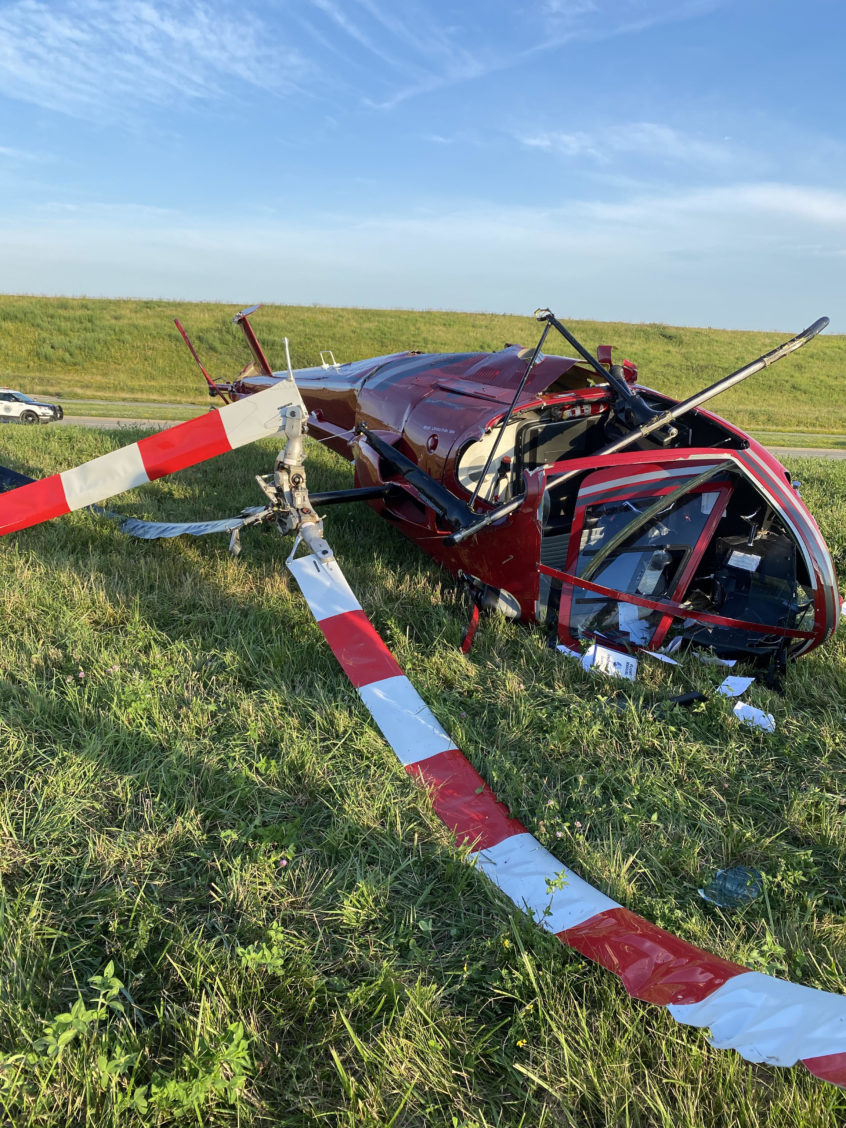 Chief 6 and ARFF 3 proceeded off the airport property and advised Operations and Des Moines Dispatch. ARFF 4 was instructed to begin calling personnel back in and to proceed to the perimeter road near the incident for possible extinguishment from the secure side of the airport.

Des Moines Fire Department personnel arrived on scene first and Engine 8 established command and advised that there was no smoke or fire and Captain Collins would have incident command and check on the patient who had extricated. Chief 6 and ARFF 3 arrived and advised dispatch and operations that a Unified Command would be employed by Chief 6 and Engine 8 (Captain Collins). The helicopter was found to be about 10 feet from the airport fence on top of the hill just East of Highway 28. The aircraft was on its right side and was heavily damaged upon first glance. ARFF 3 positioned at the tail of the aircraft about 150 feet away per the direction of Chief 6.

Chief 6 performed a face-to-face with Captain Collins and advised that the fuel and ignition needed to be cut to the aircraft immediately. Chief 6 pulled the fuel shut off and turned off the master power switch to the helicopter while taking the keys out of the ignition. Chief 6 advised on scene crews to try to leave all debris in its place for investigation purposes. Fuel could be smelled but no large amounts seen leaking and no active leaks were observed. Unknown if fuel had spilled or the amount.

The pilot stated that he lost rotor speed and could not maintain lift which he believes led to the helicopter crashing at the incident location. The pilot stated that he had about 15 gallons of fuel left on board. Chief 6 verified that there was no fuel leaking at the time and it was noted that the fuel type was 100LL or AVGAS. Des Moines Fire attended to the patient and transported to the hospital and Des Moines Fire units were released at this time due to no fire and no other victims. Refer to Des Moines Fire EMS report for patient information and assessment findings.

Debris was spread from Army Post to the incident location and it appeared that the helicopter had hit the ground before possibly bouncing up and crashing at its final resting place. Operations Supervisor Nick Everhart contacted the appropriate authorities including airport directors and the FAA/NTSB. It was decided that the helicopter would be moved from the crash site to a secure hangar on airport property for investigation.

DMPD remained on scene along with Airport Fire until an aviation recovery team arrived and was able to lift the aircraft and tow it to a hangar in the South T area. ARFF personnel remained with the helicopter throughout to ensure no ignition of fuel. During the moving of the aircraft it was noted that fluids were leaking and monitored by ARFF personnel. A total of less than one gallon of fluid was observed leaking during the process of moving the aircraft. Once placed in the hangar, ARFF personnel returned to station without incident.

Debris was picked up from the incident site and placed in the hangar with the damaged helicopter.